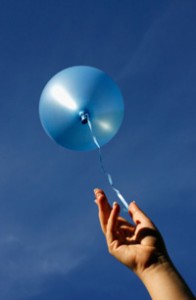 In her blog Baptism By Fire, Wolfers wrote a wonderful post about our emotional attachment to clutter, and how she wasn’t yet ready to let go of her baby-related items.

It’s been a couple of years already since I reached the point of being ready to let go of my baby clutter, so I was surprised by the emotions that stirred up when I read her post.

As I never actually became pregnant, I accumulated only a few baby items. It took me several years before I had the courage to say goodbye to them, but when I did let them go, it was sad, but not difficult. I was ready.

The things that brought on the strongest wave of emotions were all the books I’d bought over the years as I’d tried to uncover the magic formula to my fertility. I had books on Chinese medicine, diet, mindfulness, you name it, and I can remember feeling so angry when I put them in the donation box. I felt as if I’d been taken for a ride by these authors who had promised me a miracle. I felt duped and cheated—and really, really mad.

They’re out of my life now and largely out of my mind, but even though they’re gone, they’ve still left a mark where they used to be. And sometimes that mark gets sore again.